Our Kickboxing and Combat Fit instructor, Hemerson Toco Souza, started training Muay Thai (also known as Thai Boxing) at 13 years old, in his hometown Curitiba, Brazil. He had his amateur debut at 15, and at 19 he had his debut as a professional. He is undefeated in Muay Thai, with 14 wins and no losses. He has also competed professionally in both MMA and Boxing, with 15 MMA fights, and 6 Boxing bouts.

He is a Black Belt in Muay Thai under the famous André Dida, founder of the team Evolução Thai, and he is also a Purple Belt in Brazilian Jiu Jitsu. He works regularly as a cornerman for several UFC fighters, and has many years of experience as an instructor, teaching people of all ages and skill levels, from professional athletes, to beginners and regular practitioners. 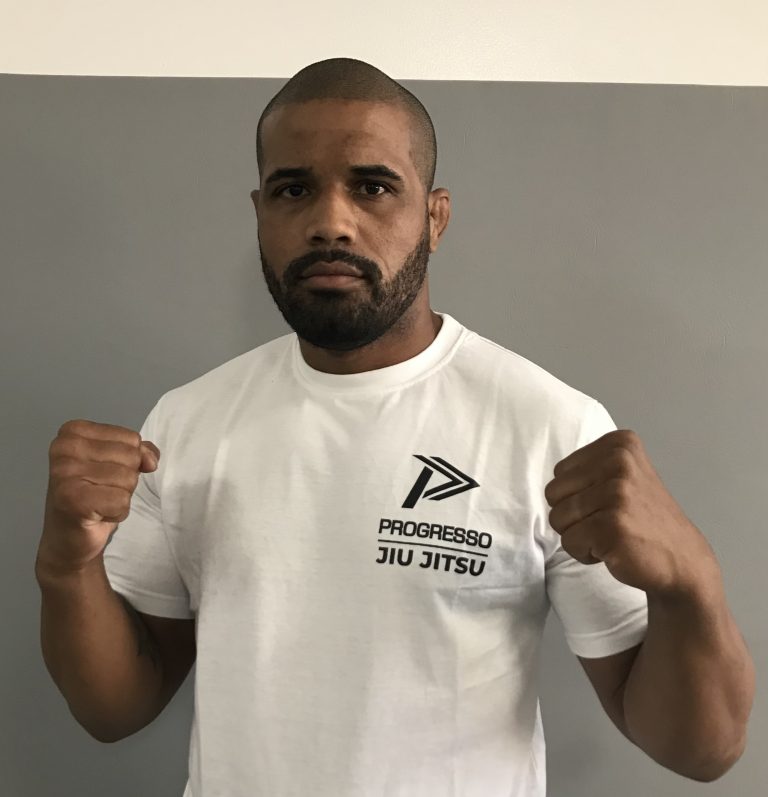 I’m not in great shape, will the classes be too intense for me?
The classes are structured so that each student trains at their own level. Everyone can join the classes, and you’ll be in control of the intensity of your workout. You don’t have to be in great shape before joining our classes – we will help you achieve that.
Will I have to spar during classes?
No, our classes do not include sparring. You will learn all the different striking techniques, how to defend and block strikes, and how to use footwork, but you won’t be sparring against someone actually kicking and punching you.
What equipment do I need?
For the Kickboxing classes you’ll need a pair of boxing gloves (preferably 12-14 oz) and hand-wraps to protect your hands and wrists. If you don’t already have a pair of gloves, you’re welcome to do the Free Trial Class without them before you decide whether you’d like to sign up. We also recommend using shin-pads, to protect your shins and feet. All the equipment is available for purchase at our academy.
What does your Combat Fit program involve?
Our Combat Fit program is a boot camp style workout, a circuit training routine using methods such as HIIT and Tabata, to improve your cardio, endurance, strength, speed, agility and mobility, while burning calories and building muscles. Instead of using equipment such as treadmills, machines and heavy weights, we incorporate lots of bodyweight and functional training exercises. Some of the things that we use during classes includes: kettlebells, battle ropes, airdyne bike, rubber bands, sand bag, speed ladder, medicine balls and similar equipment, giving you a fun and challenging workout that works different muscle-groups, and improve both your aerobic and anaerobic conditioning.
How long does it take before I start to see results as far as my conditioning goes?
The key to achieving good results is consistency. You can’t expect to reach all your goals within the first month of training, you need patience and consistency in your routine. That being said, most people will feel their body adapting to the training already within the first few weeks, and if you keep showing up for training and try to maintain a healthy diet, you should see a dramatic improvement as far as your fitness level and general well-being – especially if you haven’t had a regular workout routine before.
I’d like to lose a few pounds, will Kickboxing and Combat Fit help me with that?
You will definitely burn lots of calories during our classes. And the great thing is that you won’t have to stand on a treadmill or sit on an exercise bike for hours to achieve your goals. Instead you can do a different and exciting workout in a group together with other students that motivate and encourage each other. You don’t have to worry about planning what you’ll be doing in the gym – all you have to do is show up for class and our instructor will guide you through a complete workout that works your whole body. It’s also important to remember that your diet is very important if you’re looking to lose weight, so make sure to try and keep a healthy and balanced diet as well.
How often should I train in the beginning?
For most people we recommend starting out with no more than 2-3 sessions per week. It’s important to give your body time to adapt to the training, especially if you haven’t done Kickboxing or similar workouts before. After a while you can then increase the number of weekly training sessions if you want to, but for most people 2 or 3 weekly sessions is a good balance where you will feel like you’re improving every week, without burning yourself out physically or mentally.
What does a regular Kickboxing class look like at your academy?
The class starts with a warm-up followed by shadowboxing. Students will learn different kicking and punching techniques which they will practice on focus mitts and kicking bags. They’ll put the different techniques together in combinations which will build not only their cardio, speed and coordination, but also develop their cognitive skills. In the end the students will do some different calisthenics followed by a cooldown and stretching routine.